What lies in store for the future of Pine Forests in North America? What can you do?

Pine beetles have devastated many parts of our natural pine tree forests already. The beetles affect Ponderosa, Lodge Pole, Scotch and Limber pine. Bristlecone and Pinyon pine are less commonly attacked, but New Mexico is currently battling the beetles in the Pinyon. White pines are being attacked in the Pacific Northwest.

Colorado's Lodge Pole population is at high risk because of the dense growth and age of the trees. (Beetles preferentially choose pines about 80 years old in thick forests) Lodge Pole Pines and Mountain Pine Beetles have an eons-long understanding. The beetles kill the trees, the forest burns, the trees re-propagate using the intense fire power. As much as we hate it, this has been the cycle for millions of years.

However, other types of pines do not propagate using fire and are at high risk for severe die-out without renewal. This will affect our enjoyment of the natural forests for years to come as well as our logging and wood-producing industries. 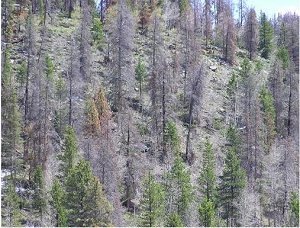 Whether there is any man-made intervention that will actually "save" the forest as they exist today is the big question. Certainly, doing nothing will guarantee a vista like the one seen in these photographs taken on the Western Slope of Colorado in June 2008. Climate Change may the biggest culprit. Warming trends have ended the seasonal freezes that control the numbers of pine beetles. And drought conditions have allowed the bugs to attack more and weaker trees whose defenses are poor.

These slopes were some of the first to be attacked. Caught off guard, the trees died before any intervention was tried. These mountain vistas were the "canary in the mine" for the rest of us.

The Rocky Mountain National Park has chosen to treat only the landmark, visible, and valuable trees. That leaves literally millions of acres of wild forest uninhibited to spread as nature wills (both in the Park and to adjacent private property).

Private property owners are trying to get control by seasonally cutting affected trees, and seasonally protecting non-affected trees. Whether this effort is "too little too late" or not remains to be seen.

Studies have shown that during epidemic conditions, the pressure from beetle populations who must go SOMEWHERE (even if conditions are not optimum for them) may reduce the effectiveness of all treatments. Given the "find a tree of any size or perish" imperative that emerging pine beetles face, they may habituate to both chemicals and pheromones. However, we still have a few years to work on the problem in areas that are not yet completely overrun and experiencing that intense pressure. The time gained through preventative measures may give just the breather necessary to let nature begin to draw back the danger or for other management techniques to take hold.

Many, many universities and private companies are working feverishly to produce more effective beetle deterrents or beetle killers. New products are in the pipeline, but it takes an eternity to get them approved by the EPA. We'll keep you posted as we hear about new approaches that work.

Dead trees pose a fire risk. However, the risk is highest in the first year or two after the die-off, when needles are still on the tree and sap is still volatile. By year two, when the needles have fallen to the forest floor, the risk is lessened to a large extent.

What can you do?

1. Learn all you can about the Mountain Pine Beetles.

2. Be vigilant on your own property and persuade mountain neighbors to do the same. Follow the guidelines presented here to treat and dispose of infected trees.

3. Prevent your own most-precious trees from infection using Verbenone Pouches and/or having them professionally sprayed annually between May 1 and July 1.

4. Thin your forest area. This may mean cutting as much as every other tree over time. (This should not be done all at once, as the shock may damage the remaining trees)

The beetles rarely fly more than 150 - 500 feet or so. They also prefer shady areas. Letting more sunlight into the forest not only disturbs the beetles but it allows the trees to become healthier and more robust. A stronger tree has a better chance of surviving an attack.

5.The "greenest" solutions such as Verbenone work best when less than 15% of the trees are infested. If you protect against mass beetle attack and cut the few unlucky trees that ARE attacked each season, you can keep the number of "hatcheries" to a minimum.