What to do after a tree is infested with mountain pine beetles. Techniques for proper handling of Pine Beetle Infested the wood.

Colorado (Wyoming, Montana and other western states) are having a terrible time with the mountain pine beetle epidemic. The Western Slope of the Rockies has been desimated in many places because the beetle got out of hand before anyone realized the severity of the scourge. Their sacrifice is our warning. They are the canary in the mine.

In May 2008, the Governor of Colorado signed into law tax rebates to be granted to businesses that use the blue-stained wood from beetle-killed trees to produce value-added items. He also granted tax exemptions to purchasers of blue-stain wood.

In Spring 2008, the City of Estes Park, Colorado passed an ordinance requiring the property owners within the city limits to cut down and properly dispose of any and all trees infested with Mountain Pine Beetles. They projected that without this law, 100% of the Lodge Pole Pines and 60% of the Ponderosa Pines in their city would perish.

Several technology start-ups are trying to find a way to turn the cellulose material from wood into bio-fuels.

Most larger mountain communities are installing slash-removal locations that are free to the community, and as many as possible are installing air curtain burners to handle the huge volume of wood needing to be destroyed. (Pictured is a burner located on Hwy 7 South of Estes Park)

Some of the drop-off locations are employing giant chippers instead of burners due to the green house gasses released by burning.

Logs infested with Mountain Pine Beetles can be handled in several ways. Some ways are more laborious than others, and some produce usable by-products while others only contribute further to the increasing green house effect but must be considered if our forest is to be saved.

In all cases, cut the tree before the seasonal "fly" of the beetle. (Trees with clean, round exit holes visible on the bark have already let loose their minions and are no longer infectious to the forest. see exit holes pictured HERE)

After felling, trim off all of the branches (the slash) and take them (slash and all) to a collection point in your community. * (see below)

The actual trunk can be handled in a couple of ways.

1. The most laborious would be to hand-strip the bark off the trunk, exposing the larvae to the elements. There are mechanical strippers that will work well, but few of us own one. At any rate, stripped bark leaves the larvae vulnerable to the elements, and they will dehydrated and die in short order.

2. Using a portable saw mill and chipper, cut the slabs of bark off and chip them up.

Mountain pine beetle is a consumer of fresh healthy trees while Ips are normally seeking freshly killed material. The question of ips beetles and wood chips has been studied by Joel McMillan and his colleagues in Arizona.

Freshly chipped pine is very attractive to Ips beetles. When fresh pine is chipped, make sure these are scattered widely so that they dry out quickly. Its also recommended that no fresh chips are left at the base of healthy pine trees. If necessary the chips should be raked at least 6 feet away from the base of the healthy trees. The chips will loose their attracting fragrance once they have dried out, and the same thing holds for slash piles. Leaving fresh slash is an open invitation for Ips to get a local population growing. Ips Pini have a generation time of ~45 days at optimal temperatures so most areas of the western USA have multiple generations per year.

Re-use the beautiful blue-stained wood that is left (after chipping the bark sides) for furniture, flooring, or other decorative use. It is the only valuable product left of the once-magnificent tree.

3. Burn or scorch the trunk to kill the larvae. Due to the severe danger of forest fire, this is a hazardous operation when done by individuals. It should be done when snow is on the ground and only under the supervision of trained fire personnel.

Currently the Coity of Estes Park has an air curtain burner in the Estes Park region, which is for residents of Estes Park and Estes Park valley. There is also a public-use drop-off station at the HBarH Ranch on Hwy 7 at the Boulder/Larimer County Line. I'm sure others are being feverishly built.

5. Cut the trunk into manageable pieces and wrap it with plastic (at least 6 mil plastic as beetles can bore through thinner material) in a sunny location. Sprinkle the wood with water before wrapping to allow a "steaming" effect when the sun-light heats the plastic-wrapped wood. Logs must reach 110 degrees F under the bark for this method to be effective. In case they do not reach this sustained temperature in cooler regions, the Conquer will work on the trapped emerging beetles as they try to bore their way through the plastic. (Lay the trunk pieces on the plastic to spray the trunks with Conquer. It is the best of the pyrethroids, but still precautions should be taken to keep an appreciable amount from leaching into the soil surrounding your solar collection location).

6. In the past, diesel fuel was used to cover the logs under the plastic. We don't recommend this procedure as it increasess the danger of fire as well as damages the water table when the diesel eventually leaches into the environment.

7. Chip the entire tree. Unless you own a very large chipper, this is not possible. Mountain Pine Beetles choose the largest diameter trees available, which are too large for any reasonable-sized individual chippers. 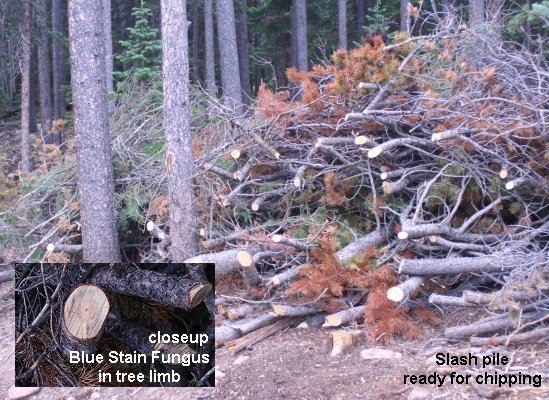 * Don't trade one scourge for another. Remove the Slash!

It is particularly important that you do no leave slash, branches, or twigs lying around after the disposal of the trunk of the felled tree. No one has made this clear to many land owners, and we are waking to a huge ips pini beetle epidemic after pine beetles are removed.

The engraver beetle or "Ips beetle" is attracted to the smaller diameter trees, branches and twigs. Areas that have been disturbed by construction, thinning or forest mitigation attract these beetles in force unless all slash is removed.