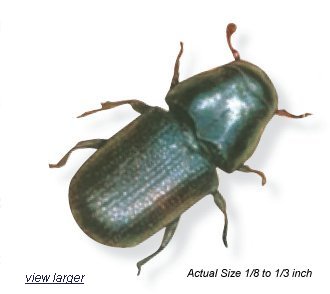 The Canadian Forest Service describes the current Mountain Pine Beetle epidemic as the largest known insect infestation in North American History. There is little doubt that the American Forest Service and the National Parks Service are having a terrible time battling the ever-growing outbreak as well. It spreads from Alaska through New Mexico - anywhere that there are conifer forests. 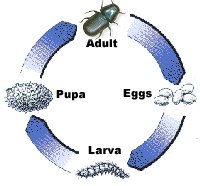 The Mountain Pine Beetle is not much different than any other 4-stage insect as far as the development cycle goes.. The major difference is WHERE the metamorphosis takes place: UNDER the bark of the pine tree where it is impossible to affect the cycle.

The adult female bores into the tree, tunnelling under the bark and creating characteristic sawdust dropping to the base of the tree. When she has reached the inside, she lays her eggs (usually about 75) in a vertical egg gallery. 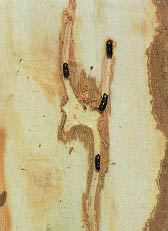 When the eggs hatch and metamorphosize into larvae, the tiny "worms" begin eating and crawling their way away from the egg nursery, leaving trails under the bark. They spend the winter in this state and transform in the spring into pupae in May and June and then into adults during the "flying season" usually mid-June - mid-July depending on the tree species and the altitude.

Lodge Pole Pines and Ponderosa Pines in Colorado usually become infested in June to early July (this is an estimate only. Warmer, lower elevations are earlier) Beetles shun sunlight and heat, so prefer to stay in shady, cool parts of the forest. They start to migrate when the temperature reaches about 70 degrees but stays below 90 degrees. They do not fly in the rain.

If the temperature drops adequately during the winter months (-30° F for 5 days) they will succumb to freezing. However, with climate change, warm winters, and drought that weakens the trees, the beetles have been surviving the winter freeze to become reproducing adults.

They live to bore, reproduce, fly and bore again into the next targeted tree.

Bark beetles communicate in several different ways. This fact is important because some species attack only sick or dying trees while others like the Mountain Pine Beetle prefer large healthy trees. They use visual cues to identify living trees., Once they identify a living tree they use Pine odors (terpenes) to "home in" on the right tree species.

They are also invited by the scent of tree sap. If a tree is damaged by construction such as house-building or cutting of lumber trees, beetles seek it out. When roots are damaged or the bark is skinned, the tree emits sap to seal the wound. It's that process that attracts the beetles. We've seen a tree damaged by construction in July look like a machine gun shot beetles into it in August.

This proclivity of pine beetles to attack damaged trees has led some lumbermen to actually damage "target" trees on purpose in areas scheduled to be cut down. The aim is to attract the beetles to trees that will be logged and properly handled, and keep them away from the green parts of the forest that will be left. This might be an option on some properties where small stands in clearings can be sacrificed to save the denser areas outside the clearing.

Female mountain pine beetles attack the pine tree first. They release a pheromone containing trans verbenol to attract male beetles for mating. As the males arrive they release another pheromone called exo brevicomin which attracts female AND male beetles. The pheromone "cocktail" blows down wind, and brings in large numbers of beetles. This is what makes the Mountain Pine Beetle so wonderfully efficient: it's ability to mass attack one tree, defeat the trees defences and then move on to the next one (usually close by).

When the Mountain Pine Beetles sense that their host tree is nearing a state of overpopulation, they produce another pheromone called Verbenone. This tells other beetles downwind that they should find a different tree to attack. This is how Verbenone works; it fools the beetles into thinking that your trees are already infested. Mountain Pine Beetles have a limited supply of energy. Therefore, the longer they spend looking for a new host, the higher the mortality from extended flight.

When the beetle bores into the tree, the tree fights back with the same wound-healing pitch it uses for other assaults. It takes quite a lot of water to produce healthy pitch, so drought-stricken trees are at even higher risk. Below is a picture of a tree with mountain pine beetle bore holes surrounded by the pitch the tree has produced in an effort to expel, trap, or kill the beetle. 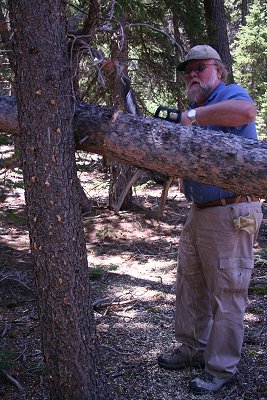 This tree is a Lodge Pole Pine in the Estes Park area of Colorado. The "pitch tubes" indicate that this tree was attacked last season by Mountain Pine Beetles. The tree has produced copious pitch in an effort to fight the beetle attack. Probably the best course of action is to cut the tree down and take precautions against allowing the beetles inside to escape to new target trees. (see "After Pine Beetle Infestation")

Although pitch tubes are evident, the top of this particular tree had not begun to rust. Therein lies one of the hardest parts of deciding which trees are doomed and which have successfully fought back. 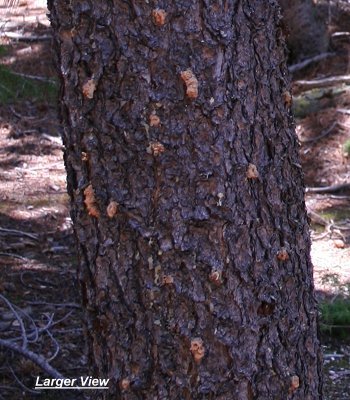 A rather large pitch tube with no entrance hole often indicates that the tree has been successful in fending off the beetles. It was a healthy enough tree to produce enough pitch to thwart the beetle efforts. Further investigation is needed to find out of the tree is actually harbouring beetles.

By using a draw knife to take a portion of bark off of the tree around the pitch tube, you can discern whether the phloem tissue (the part of the tree's plumbing system that transports the trees photosynthesized food downward from the leaves or upward to the growing buds) or the wood (the part that carries water and salts upward from the roots) has any signs of bluing - a sure sign of beetle victory.

Upon scraping the bark, the tree above was not showing obvious signs of blue stain but was sacrificed anyway on the chance of its harbouring beetles. It was in an area that was in need of thinning and not an important ornamental tree. 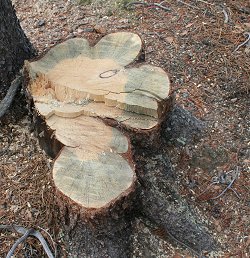 By examining for pitch tubes, this tree (right) was obviously attacked. After cutting it down, the blue stain was very obvious: a sure sign of infestation warranting removal of the tree before it could spread its hatchlings. (see the blue stained wood on the perimeter of the stump at the right)

(What actually kills the tree? The blue stain fungi is every bit as deadly to the tree as a mass beetle attack. Trees actually die from the spores of fungi known as bluestain fungi, which contaminates the bodies of the beetles and is introduced into the trees sapwood, interfering with water and nutrient transport up the trunk. (There is no known treatment for fungi contamination.) 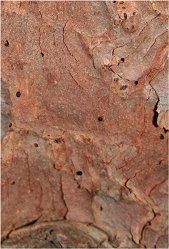 To complicate matters, according to Colorado State University Extension Service under dry conditions (experienced in the West in recent years), trees may NOT produce pitch tubes when infested, therefore healthy trees are not as obvious. Time may need to be spent looking for sawdust around a tree's circumference and at the base of the tree.

When beetles leave a tree, their emergence holes look like scattered shot-holes on the surface of the outer bark (left). There is no pitch and no bore-dust. During hot weather, beetles usually leave a tree by the time the foliage turns red brown. During either cool or moist weather, the beetles may leave while the foliage is still green. Therefore, the best way to confirm the presence of Ips or pine beetles in a tree is to remove several apparently attacked sections of bark to determine if any beetle life stages are present.