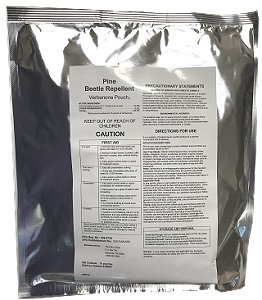 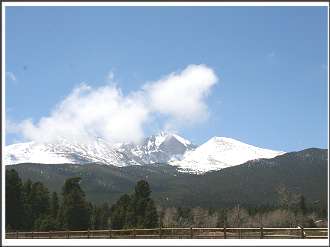 The Canadian Forest Service describes the current pine beetle epidemic as the largest insect infestation in North American history. Pine Beetles are destroying huge swaths of land from Canada to New Mexico all along the ridge of the Rockies, West to the California coast and East into the Dakotas.

Even with minimal flying ability, they are borne on the wind from one tree to another during the mountain summer.

Mountain Pine Beetles have a one year life cycle. In late summer (usually July-Aug in Rocky Mountain States) the newly hatched adults leave the tree of their metamorphosis, seeking out larger trees (usually over 13" diameter if possible) in the surrounding area. (In areas with heavy infestation, beetle hatchlings may take even smaller trees as pressure to get ANY tree increases). When the adults arrive, they begin tunnelling under the bark, lay eggs, which turn to larvae and live through the winter to produce more egg-laying adults to attack more trees.

With the exception of the actual beetle images, all pictures on this site are taken at or near our property near Estes Park, Colorado. It is our pride and joy - our sanctuary.

We, personally, have chosen Verbenone above all other products to protect our own precious trees and the fantastic wildlife that depends on them.

Fast, Free Delivery
Save up to 10%: No sales tax
Bulk & Wholesale Pricing

Bulk packs come in foil packages with 10 pouches per package. 10-packs cannot be split up and sold as individual pouches. Neighborhood Associations, Municipalities, other organizations: Take advantage of the bulk pricing and deep discounts by combining your orders.

Fast Delivery! Save up to 10%. No sales tax if not shipped to Texas. Usually Ships same business day (if received a.m.)

Verbenone and how it works.

Beetles and other insects communicate using pheromones scent signals. Verbenone - a synthetic pheromone treatment for high value pine trees - replicates the beetle pheromone. It sends a message that the tree is full and that the food supply is insufficient for additional beetles. Arriving beetles receive the "message" that they should look elsewhere for a suitable tree. They are not great flyers. Their search usually lasts longer than their stamina, and they die of exhaustion without finding a suitable home.

And can be used on:

Verbenone has been used as part of integrated pest management programs (IPM) for more than a decade. Many studies show that areas treated with Verbenone, as part of an IPM program, fare significantly better than those that are not. Commercially used from 2007 to present in CO, MT, WY, ID, OR and other western states by the Forest Service, The national pPark service, State Agencies, Recreation Areas, Home Owner's Asssociatons and others in high value recreational or private land holdings.

How safe is Verbenone?

Verbenone is not a poison. It is environmentally safe and non-toxic to humans, pets, birds, wildlife, and even the beetles themselves. It is Registered by the EPA and most Rocky Mountain States. All pheromones in controlled release dispensers are approved organic by USDA/NOP. It is user and Eco-Friendly. Unlike the insecticides approved for Mountain Pine Beetle control, Verbenone does not kill bees, beneficial insects, or aquatic organisms down stream. It is not a restricted use product. (Always follow label instructions.) 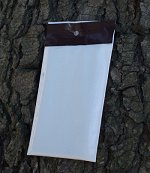 The Verbenone pouch is an easy-to-use, controlled-release dispenser that is hung on individual, un-infested trees (or placed in a grid pattern when wanting to protect acreage from Mountain Pine Beetle infestation) to repel the hatching pine beetles from the tree or the area. As the pouches gradually release the scented contents, the fragrance of the pheromone tells the beetles to stay away from that tree or area.

ISCA Verbenone pouches can be stored from one season to another if kept in a tightly sealed container or its still-sealed foil packet in a freezer. (not a plastic storage bag)

For Mountain Pine Beetles, it is our recommendaton that you staple or nail the first Verbenone pouch 7 - 10 feet high on unaffected trees just prior to beetle flight season (apply June 15 - July 1 in Mountain States. Apply earlier in lower elevations or warmer locations). Pouches release their contents more quickly as temperataures rise, and they are affected by sunlight. Because beetles prefer dark, cool parts of the forest, place pouches on the north face of the tree (where there is more shade) and down wind of prevailing breezes so that the "plume" of pheromone will waft in the direction of the trees being protected.

DO NOT put the nail or tack through the center of the packet, as this will damage the integrity of the pouch, causing it to release its contents too quickly. There is a strip at the top of each pouch that is reinforced and provided for the nail to puncture.

For treatment areas greater than half an acre staple VERBENONE pouches 6-12 feet above the ground, on the north face of susceptible trees in a grid pattern at a minimum of 20 dispensers/acre. Maximum allowable dose is 60 dispensers/acre/year. For treatment areas between one half and one quarter of an acre, place dispensers at 35 foot intervals around the perimeter and place the remaining dispensers on the north side of the largest diameter trees.

Treating larger areas gives a geometrical advantage in so far that beetles repelled from the area try and fly out of the repellent treated area, and the larger the treated area the more beetles are likely to exhaust and die during flight.

For protecting stands of trees, use at least one pouch every 25 feet in a perimeter surrounding the stand. Also place a Verbenone pouch on the North side of the largest tree. By encircling the stand and boosting the repellent on the most desirable tree, the pouches can be used in more economical fashion and may help to protect more than the one tree per pouch.

If your trees may be attacked from unattended neighboring property, try to create a Verbenone barrier on trees on the windward side of your trees (as described above) in a perimeter no more than 25 feet apart and boosting the protection on your largest trees.

Verbenone pouches are prescribed as part of a multi-faceted approach to mountain pine beetle management. No single treatment can totally prevent attacks. Additionally, preventative measures will need to be repeated each year or each flight season in areas with more than one season annually.

If more than 20% of trees are infested, repellence will be less effective.

If used for Ips Beetles

The season is longer, as two to four generations of these beetles usually develop per year. Verbenone is only partially effective against ips beetles. The best combination treatment for ips pini is a combination of verbenone and ipsenol. However, no commercially developed application combination has been developed at this time.

Overwintering ips beetles begin emerging in spring as soon as daytime temperatures consistently reach 50 F to 60 F. However, timing can be difficult to determine since ips beetles can have multiple, overlapping generations and life cycles. Use earlier and repeatedly through October.) The ABSOLUTE best practice to prevent ips beetles is to remove all slash, boughs, and limbs, (which attract ips beetles) immediately.

Spruce and Douglas-fir Beetles are different and need a different pheromone. See MCH Bubble Caps if you are concerned about those type of pines.